The last few months have been some of the strangest all of us have ever experienced. For me, it was a time of goodbyes and new beginnings all at once. In March, I packed up my office in Marquette to begin working as a Graduate Assistant from home, fully expecting we'd get to resume normal operations before graduation. Little did I know, I wouldn't be returning to NMU, or walking across the stage for an actual commencement ceremony as I received my MBA. Although I know it was for the best, I'm sad that I didn't get to say an official goodbye to the good friends I made in school or bid a proper farewell to my awesome College of Business coworkers.

I also never expected to graduate without a definite plan for where my future was headed. My goal, like most college students, was to have a job lined up pre-graduation. I quickly learned that trying to find professional employment during a global pandemic was not going to be easy. It was humbling and scary to have to embrace the unknown and deal with multiple rejections. My Enneagram Type 3 personality has been challenged in so many ways. I've found that although still meaningful, academic achievements and awards don't necessarily mean much if all companies are laying people off and halting any job postings. Luckily, as the economy reopens, things are looking up. I also have the amazing support of my family, friends, and husband, who seriously deserves an award for being so understanding.

Eating...on not restricting and finding variety

With restaurants closed over quarantine and having more time to be home, I've been able to cook and bake quite a bit. I still deal with food guilt, but I can (for the most part) recognize it and shut it down as it occurs. When I'm having negative body image days or hearing a voice in my head that says I should work harder to be smaller, I always go back to my mantra: restriction is not the answer, and it will not solve the problem. That being said, I do like to eat in a balanced way that makes me FEEL good and like my best self. It seems like variety is key, and I try to eat in ways that don't make me feel bored or too rigid. My body thrives best when I just give it a good mix and listen to it. I eat what I want, and sometimes my body wants a salad, and sometimes it wants a bagel sandwich with butter, it varies on the day. Here's a little of what's been on my plate... 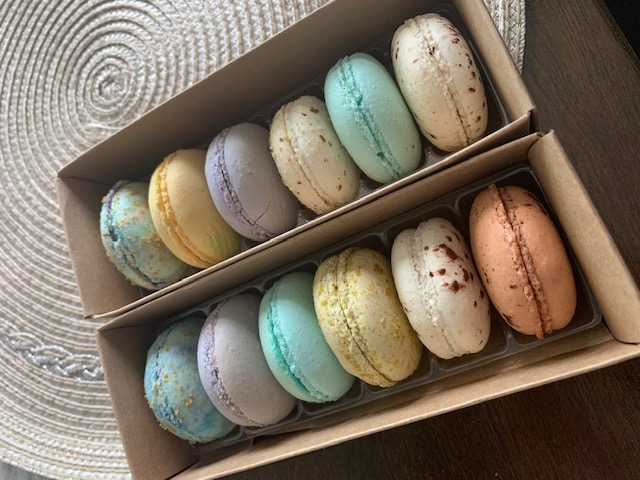 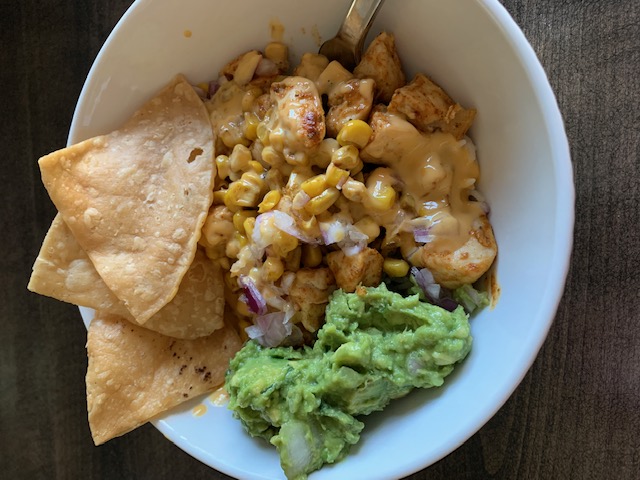 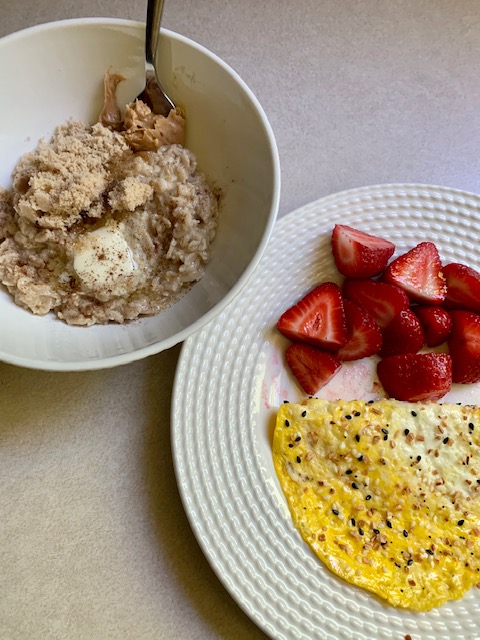 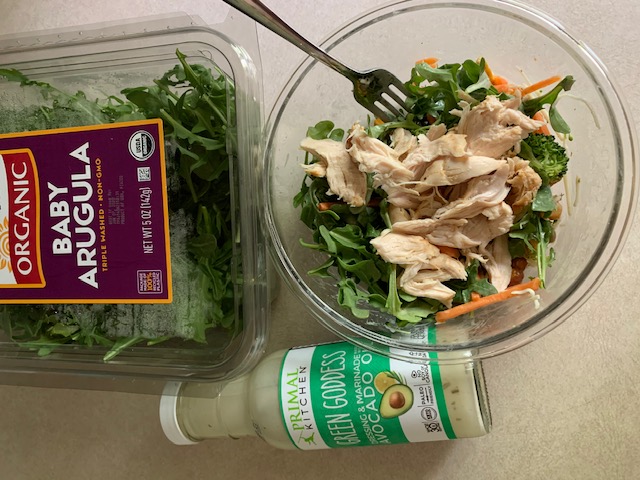 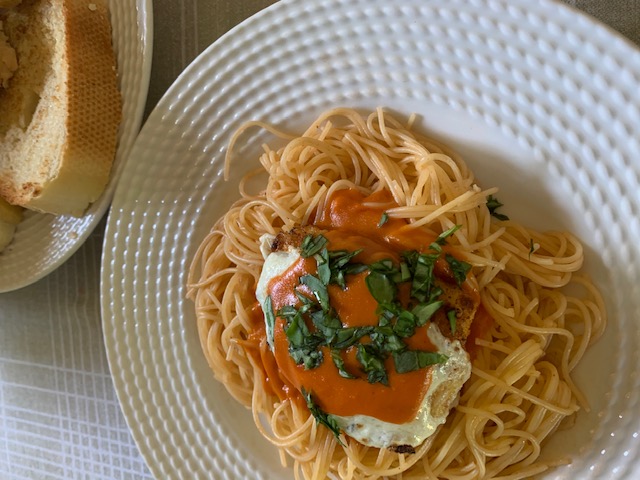 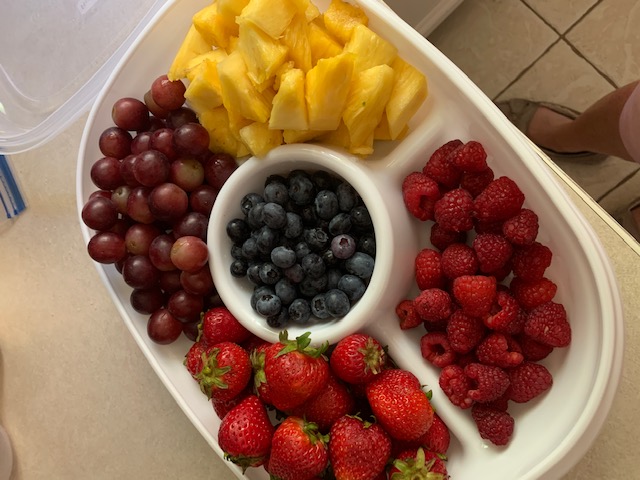 I made burrito bowls recently - it's one of me and J's favorite meals. Also, I rarely want oatmeal, but when I do, I am an oatmeal "purist." I like old-fashioned oats cooked on the stove then topped with butter, brown sugar, cinnamon, and a tiny splash of vanilla. I also added a scoop of peanut butter for a little extra protein that day. The salad pictured is a simple, nutrient packed one made with a new favorite dressing - Green Goddess by Primal Kitchens. The macarons were from a visit with a friend, the chicken parm was from when I felt the need for some Italian comfort food, and the fruit platter was made for a get together with some girlfriends, complete with a cream cheese fruit dip as well.

Since quarantine started, I tried to keep a somewhat familiar workout routine. Luckily, I already work out primarily at home, so gyms closing didn't really affect me. Despite that, I had days during the last few weeks of school where I simply felt exhausted - physically and emotionally. During those times, I allowed myself the rest. I challenged myself a few times by going 2 or 3 days at a time without doing regimented exercise. The 3 days stretches were really hard for me, but I'd ask myself: "do you want to work out because you know it will feel good and you WANT to, or are you doing it to soothe a compulsion?" Most of the time, the latter was my answer. In these moments, I've pushed my mental connection with exercise further than I have before, and listened to my body more than I ever have. It still isn't easy, but you know what? The world won't end if you don't move your body in a regimented way for 3+ days. In fact, literally nothing changes. Every day I go to work out, I continuously make myself aware of my feelings surrounding that movement. It's mentally taxing, but it's worth it to heal that relationship.

Boxing: I've really been enjoying the "10 Rounds" program from Beachbody. The workouts combine boxing, cardio, and ab work. There are also upper and lower body weight days. What I've found is that the boxing workouts make me feel strong, powerful, and happy. I honestly look forward to doing them. It feels really good to nail a combination and truly enjoy the movement - it's unlike any other workout program I've done before.

Train Happy: One of my favorite Instagram trainers, authors, and influencers Tally Rye has a "Train Happy" Facebook group to complement her book, also called Train Happy. During quarantine she started posting lifting and body weight workout videos for the group. What I love about Tally is that she is such a breath of fresh air. She's an advocate for health at every size (HAES) and nothing she does is centered on weight loss or changing your aesthetic. I can't tell you how refreshing it is to have someone in a video who isn't yelling "earn your break!" or "do it to get those tight, toned (x)." Yes Beachbody, I'm talking about you. I love the structure and format of BB workouts, but I don't love some of the body-centric language used in the videos. Unlike BB, Tally admits when she needs a break, tells the viewers not to push too hard, and says things like "if you feel the need to stop after 2 rounds, go ahead and do what feels good for you." Amen to that.

Other non-regimented movement: Aside from great home workouts (post-workout selfie below) Jake and I have been trying to get outside more, whether it's a walk in the park throwing some discs, a drive out to a lighthouse to walk around, or a quick stroll up and down the road. I also went down to see my friend Erin and she took me on an awesome hike along the Fox River. We were both sweating by the end, and it was truly some awesome movement on a beautiful day. We stopped for a necessary photo op and water break - oh yeah, she did this 28 weeks pregnant! Bottom line? You don't always need to be "officially" working out to move your body in ways that feel good. 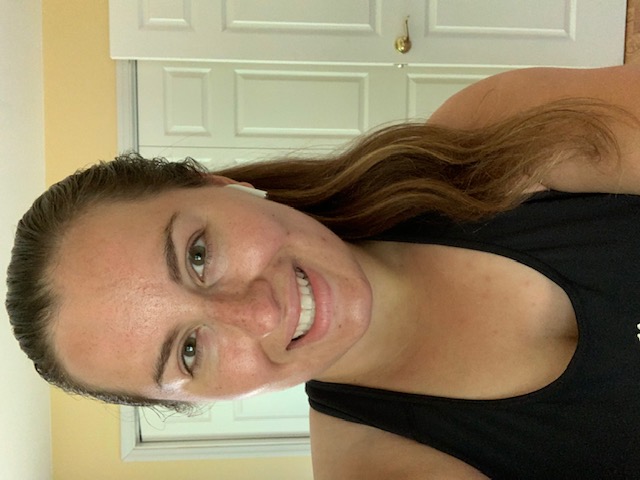 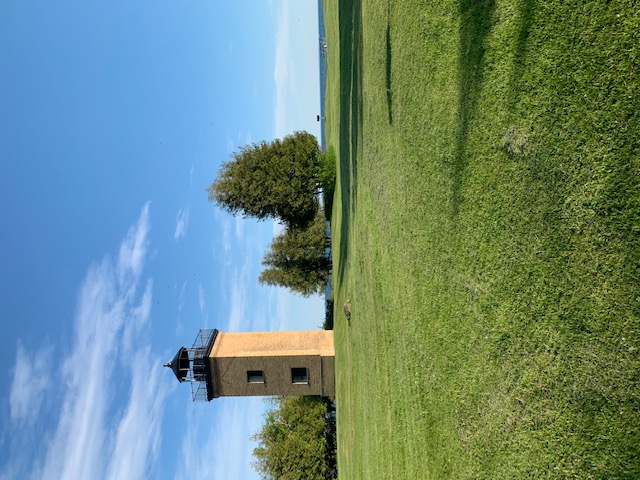 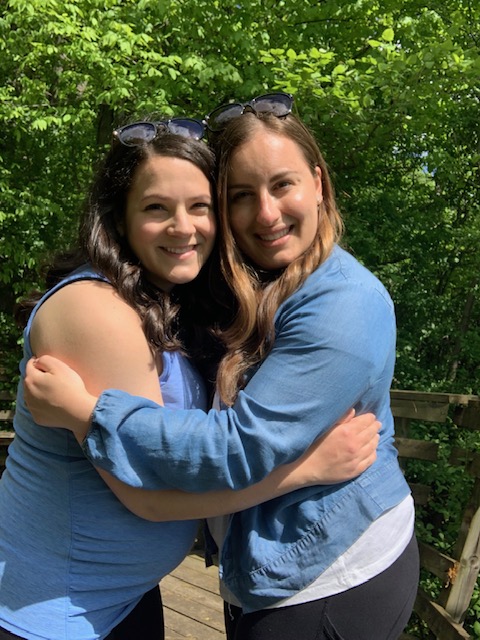 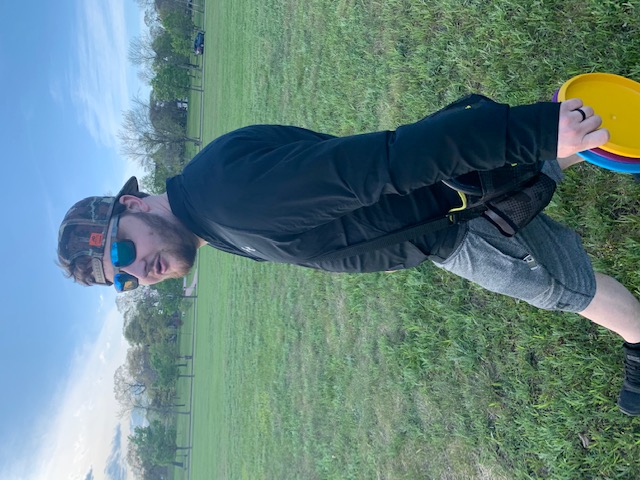 I understand if you just stopped reading this blog post, LOL. If you're like my husband, you're making a really awkward face that says "you read fantasy books?...k" Honestly, I'm a huge fiction gal. Give me all the unrealistic fantasy, ok? During quarantine, I was able to really rediscover my love for books. I partly thank quarantine and partly thank school ending. No longer do I have to be a slave to academic reading! Here's what's been on my shelf:

A Discovery of Witches (All Souls Trilogy) by Deborah Harkness: a super complex and elaborately written ~2000 page trilogy about an Oxford scholar (Diana Bishop) who meets an Oxford scientist (scholar Matthew de Clermont). Let me just mention, she's a witch and he's a vampire. Together they discover the secrets behind an ancient manuscript that might be the answer to their existence - and obviously they fall into a forbidden romance. The whole thing was quite captivating to me. I became obsessed, and then I watched the show, which was also well-done.

I won't bore you with the rest, but I'm also sucked into the Court of Thorns of Roses series, which is about faeries...yep, I went there. Not the Tinkerbell-type fairies you're thinking about, though. The kind that are human looking but have super-human powers and fall in love with mortals. I love a book series that starts with a realms map, and this universe is quite interesting. Feyre is a human who crosses over into Faerie territory (called Prythian) for killing one of them unknowingly, and she learns that it's not at all what she expected. I'm into book 2 of 4, and it's really good. The series is nowhere as near as complicated or complex as the All Souls Trilogy, but it's an easier read and I appreciate that. As you might have expected, it's also a drawn out love story.

Others who made the cut include quick-read Normal People (Romance) by Sally Rooney, The Two Lives of Lydia Bird by Josie Silver (Contemporary Romance), and The Lies that Bind by Emily Giffin (Romance, Mystery, deals with 9/11) 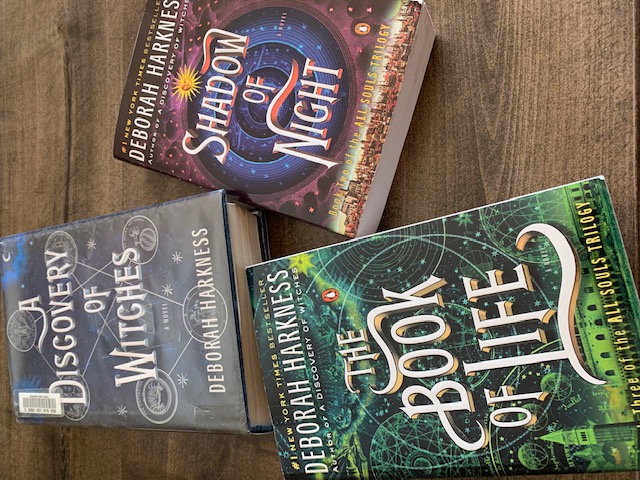 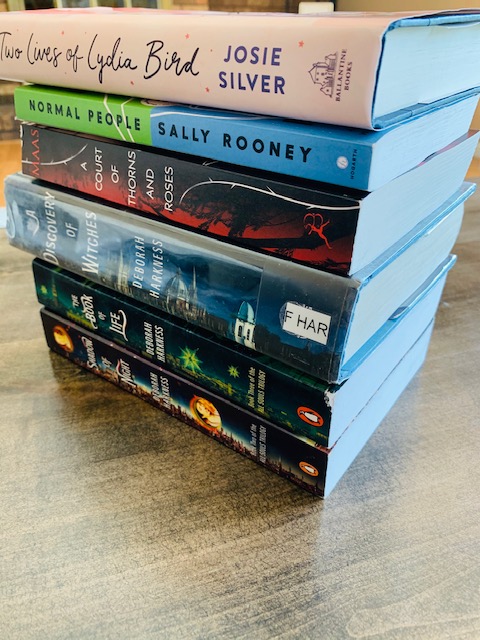 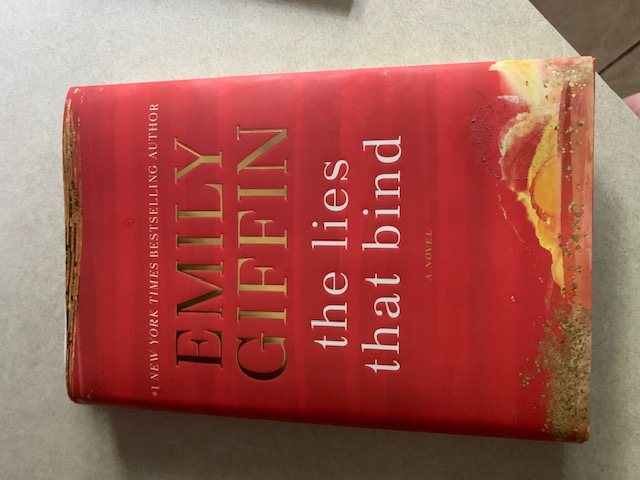 Quarantine was also ideal for TV streaming. Since March, I've watched what some people may say is an alarming amount of Netflix and Hulu. I, however, see it as a challenge. Can I maintain all my relationships and live a normal life while remaining devoted to an unspeakable number of TV shows? Sure, why not! Here's what's been streaming...and yes, I recommend them all!

Well, that about wraps it up. My entire life since quarantine started, condensed into 5 not-so-short sections (oops, sorry about that). I keep saying I'll write shorter blogs, but I can't seem to do it. Friends: be safe and stay healthy as you pursue the outside world during a pandemic - and wear your masks!

5 Things: From Working Out to Bachelor Mondays

Negative Self Talk Won't Do You Any Favors